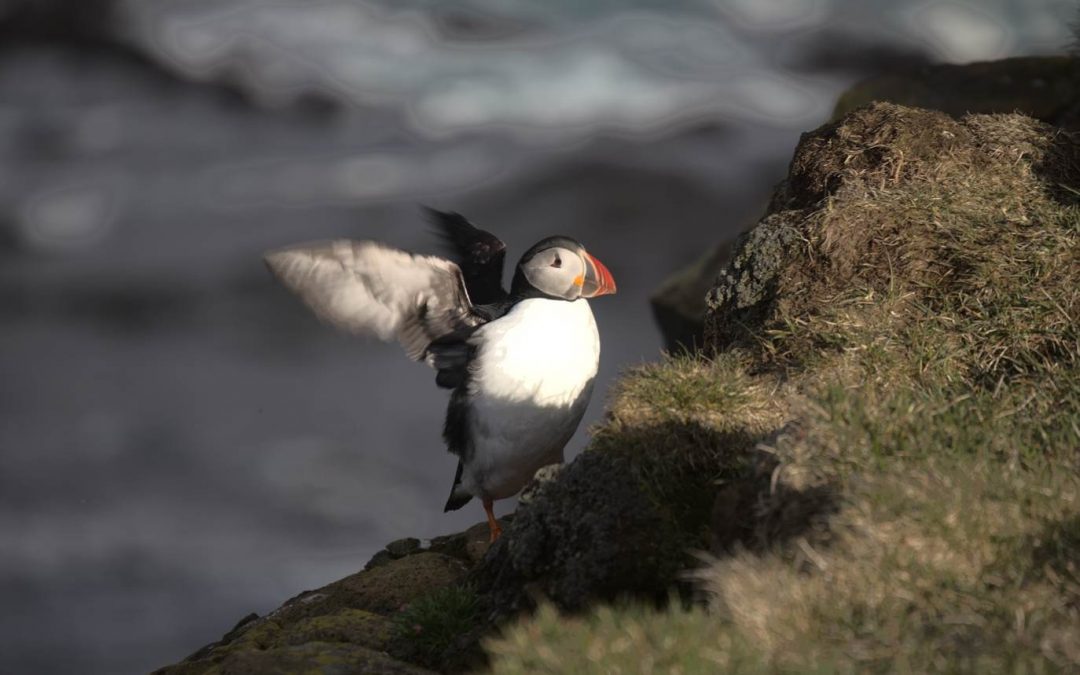 We woke again around 4 am seeing the weather was fine, we thought if we did not take this opportunity to venture, we would never find the best time to visit Latrabjarg. So we drove back to where we believed we saw the sign to Latrabjarg. We were right, the sign was there and it was invisible if you are coming from Patreksfjordur, like us.

Latrabjarg is named one of the best bird watching paradises. There is no better thing to do than driving in the midnight sun when everyone is in their sleep and roads are all clear. Our Ford Kuga has managed to advance well on the unpaved sandy road with millions of potholes. By the time we arrived at Latrabjarg, the weather was well enough to allow us see the magnificent cliffs and the oceans. (Although the road to Latrabjarg is not a F road, we highly recommend people visiting the place to drive a 4WD. We were glad that we didn’t go there yesterday because the bad weather would have made it extremely dangerous!)

We thought we were early, but one person was already there taking photographs when we arrived. Our Canon 75-300 zoom was unable to lock the flying birds in focus when we were standing by the lighthouse. Later on, at the other end on the higher ground, we finally got a glimpse of a puffin. It was so cute! It flew away after touching the rock shortly. We noticed another puffin and took many pictures before it hid itself in a burrow. Although June and July is the best time to see puffins, we only saw two this morning! We wanted to stay longer, but time didn’t allow us! There was still a long drive ahead…

We would say for those who are interested in bird viewing, they should reserve a whole day for this.  A picnic on the cliff would be nice, but be warned there is not toilet!

One next stop was the Dyjandi waterfall. It was spectacular under the blue sky. The route 60 leading to this waterfall was steep and rugged with many potholes, like most other roads in this region. We were glad that we took the advice from the car rental company to hire a 4X4. Even so, during the drive to the waterfall, at one point we nearly lost control of the car (later on we searched information on the web and found the Ford Kuga is not a real 4×4. It is fitted with an intelligent system to control the wheels). Lucky for us that it was a sunny day. It would have been impossible for us to inch forward on these deadly roads, had it been raining! After hours of very nervous drive, we were there! You couldn’t imagine the joy of seeing the sign of the waterfall. The clear blue sky and the snow capped mountains set the perfect backdrop for us. As soon as we stepped out of the car, we were impressed by the sound and the fury of the running water. The waterfall is facing the most beautiful fjords in the region. With the peaceful fjords on one side and the thunder like waterfall on the other side, it is like a showcase of the magic of nature.

It is only human nature to want to release bodily fluid after a long drive. We were pleased to see a nice toilet near the carpark… but as we approached to it we found out that the doors were tightly locked. The disappointed travellers, such as me and my wife, had to make a hasty way to the nearby towns.

So we continued our journey and paid extra attention on any signs of toilet facilities. We did not see one, but we saw a sign of a tea cup along the road. Our logic told us that where there is a cafe there must be toilettes. It was, indeed, more than a cafe. We reached the Jon Sugurdsson Memorial Museum at Hrafnseyri. Jon Sugurdsson is the national hero who brought independence to Icelandic people. There is a cafe house next to the museum. The cafe is where Jon Sugurdsson has once called home. We took a break to enjoy an afternoon tea and freshly made waffle. The museum, including the cafe, is managed by a middle aged couple. The wife was so nice that she not only made us wonderful waffle, but also told us the history of Icelandic independence. From her, we also learned how the GFC has impacted the life of Icelandic people.

In the evening we arrived at Isafjordur. It is the largest town in Westfjords with population of 3000. Because it was late we decided to dine at the hotel’s restaurant. While the view and the service were good, the food was only so so but expensive. That ended our fourth day in Iceland. These days Isafjordur is more accessible because of the tunnel constructed a few years ago that shortens driving time considerably. Driving through the tunnel is yet another new experience to us. It is dark, very dark and very narrow. It has only one lane and allows only one way traffic so on coming vehicles must stop at waiting bays.